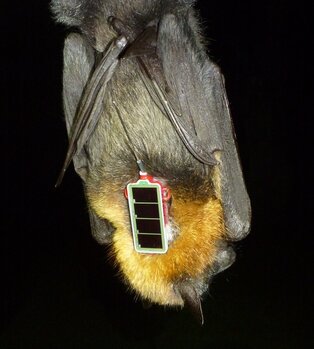 Photo by Topa Petit
The distribution of flying foxes in Australia is influenced by the unpredictable availability of their preferred diet, especially eucalypt blossoms. Recently, human activities, including destruction of native habitat and planting of non-native vegetation that provides predictable foraging, have altered the distribution and movements of flying foxes. The consequences of this change are important for both bat and human health, given that bats are reservoirs of Australian bat lyssavirus and Hendra virus, both of which cause fatal disease in humans. In 2010, grey-headed flying foxes (Pteropus poliocephalus) established a permanent roost in Adelaide, South Australia, several hundred kilometers outside their previous range. In collaboration with Dr. Wayne Boardman and others, I deployed lightweight GPS loggers on a subset of Adelaide flying foxes to track their movements in this novel landscape. This work is currently in revision. 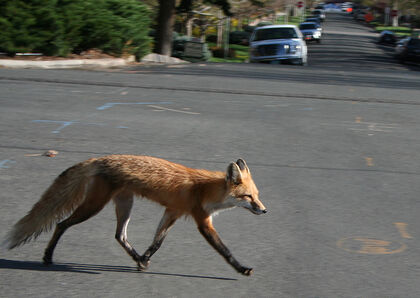 Photo by Jeffrey Beall, Wikimedia Commons
Urban wildlife encounter different conditions than their non-urban counterparts, such as increased food availability, new animal communities, and exposure to toxic substances, all of which could affect their health. I co-led a meta-analysis with Dr. Maureen Murray, where we analyzed data from previously-published work that compared urban and non-urban wildlife health. Specifically, we studied four metrics of health: body condition, stress, parasitism, and toxicant loads. We found an overall negative effect of urbanzation on wildlife health, driven mainly by higher toxicant loads and greater parasitism by close-contact parasites in urban wildlife. Read our paper, published in Frontiers in Ecology & the Environment, here. Co-author Kaylee Byers and I also wrote a piece in The Conversation about our paper, which can be found here.
Body condition and parasite infection 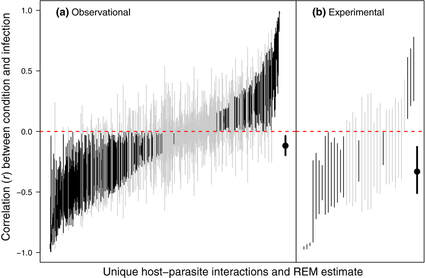 Body condition metrics (e.g. BMI in humans) are often used to assess wildlife health and effects of parasites. Although parasites are assumed to harm their hosts (which would cause lower body condition), there are examples of parasites having no effect or even a positive effect on hosts. I co-led a review and meta-analysis with Dr. Dan Becker and other members of the Altizer lab at UGA. We first reviewed mechanisms that could cause negative, positive, and null relationships between wildlife body condition and parasite infection, then analyzed data from > 100 previously-published studies that examined these condition--infection relationships in wildlife. Our paper, published in Ecology Letters, can be found here. A press release can be found here.
SOAR: Survey of Australian flying fox Rehabilitators 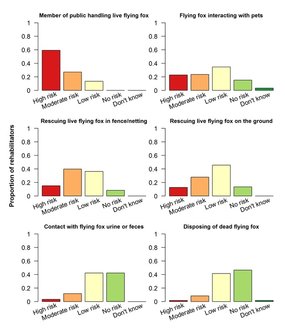 In collaboration with Dr. Michelle Baker, I developed a survey about demographic information, disease risk perception, and safety practices amongst flying fox carers in Australia. Despite a 100% rabies vaccination rate (administered to prevent transmission of Australian bat lyssavirus), we found room for improvement in use of personal protective equipment. We also recommended that carers develop Australia-wide guidelines for safety when rehabilitating bats and that the responsible government agencies in Australia support carers who rescue potentially lyssavirus-infected bats by offering compensation for costly protective equipment. The resulting paper, published in PLOS Neglected Tropical Diseases, can be found here.
© Cecilia Sánchez, 2020. All rights reserved.
Powered by